My Dad, Fiddlin' Rufus and his family played music all of their lives.  However, he had a Professional music career that spanned from the 40's until he passed away with cancer in February 1986.  Rufus' professional career began when he was one of a group of musicians who started "Gathrights Saturday Night Jamboree".  What you will be looking at here are pages from a thick booklet that was sold at every performance.  These programs sold  for the whopping fee of $.50.  You could go to a movie and buy a coke and a candy bar at that time for only $.35.  So you can see that $.50  was a handsome price for a family to spend for entertainment.  Gathright's Jamboree grew out of a simple jam session.  A few musicians would gather after hours every Saturday night at a business establishment called Gathright Van & Storage Transit Co. This company was located at 300 Pine Street in Pine Bluff, Arkansas.  Their goal was to play, sing, and have a rollicking good time.  By January 9, 1943, this group was broadcasting this jam session over local radio station KOTN.  These programs were broadcast by remote control from the sales room.  No admission was charged.  Eventually, the crowd gathering to watch these talented musicians outgrew that venue.  More room was needed.  The seating capacity was extended and Gathright's Hayloft was born.

DAD'S NATIONAL BREAKTHROUGH came with a contract to the Louisiana Hayride.  He left his local area with Sammy Barnhart to perform there.  The Louisiana Hayride was broadcast live every Saturday night from 1948 to 1960 on 50,000-watt radio station KWKH out of Shreveport, LA's Municipal Auditorium.  It was broadcast to America's heartland and relayed to both coasts by the CBS Radio Network.  The show was also broadcast overseas by the Armed Forces Radio Network.  Hank Williams Jr. is quoted as saying, "If the Opry was the Promised Land, then the Hayride was Heaven's Gate".  Hank Jr. was born in Shreveport while his famous father was a member of the Hayride.  Another performer who would become famous was Elvis Presley.  Elvis signed a contract to perform every Saturday night for eighteen months for a whopping $18.00 per performance.  It was at one such performance in December 1956 that Hayride producer Horace Logan coined the phrase that would signal audiences all over the world that Elvis had finished his last performance, "Ladies and Gentlemen, Elvis has left the building!"  Dad's good friend, Kitty Wells made her debut there.  More acts included Faron Young, Jim Reeves, Jimmy Davis, Gene Autry, Johnny Horton, Johnny Cash, Tommy Sands, Slim Whitman, Red Foley, and Red Sovine. Dad would perform here for 12 years - the duration of the Hayride.  View Dad's Union Card (he was there well before Elvis), his band at the Hayride, and the Hayride Auditorium (above).

Dad's talents ultimately led to Nashville.  In quick fashion Red Sovine offered Dad a contract to play the fiddle in his band.  Simultaneously, Clyde Moody offered him a long term contract to bring his Arkansas-based band to the  Grand Ole Opry. (Elvis performed at the Opry only one time and was told he did not fit).  Clyde specifically wanted to showcase Dad's singing and yodeling.  After giving it serious consideration, Dad declined his offer.  He had a wife and five children at home and Mother was insisting that he be there to help her raise them.  His youngest son, Jimmy, was creating a pressing need for guidance in his life.  Clyde asked Dad if he was able to satisfy his desire to play music without a Grand Ole Opry contract.  At that particular time Dad had me performing with him.  He also had two radio shows a day on radio station KOTN in Pine Bluff, AR.  He also had a weekly radio show on KCLA.  Dad was one of several performers who orchestrated the first live T.V. show  of it's kind in the entire state of Arkansas called "Homefolk's Party".  He also routinely performed at every rodeo and other concerts in around the regional area. (I always had a seat directly above the cowboys getting on their bucking horses and bulls).  Clyde essentially told Dad that he was very envious of him for being able to perform in such a variety of venues and still be close to his family.  He reluctantly agreed that Dad's decision was the right one for him at the time.  After making that choice, Dad continued to expand his musical presence in Arkansas and the surrounding area.  If you would like to hear my dad singing a favorite of mine that I always got him to sing, "Old Shep" go to this website http://www.youtube.com/watch?v=ZergDx6SNvY And, if you would like to hear a mini session of my Dad and me singing impromptu go to this website   http://www.youtube.com/watch?v=sNhCyZnpZyc
I was "Little Bobby"!  The only one of a family of five who performed professional with my Dad.  I cut my musical teeth on state-wide radio station KARK out of Little Rock at the age of four (The same station where my Dad had first performed).  Grandma Brewer pushed me into a singing career by promising to buy me a naval uniform just like the one my favorite Uncle Stansel wore.  All I had to do was sing "Bell Bottom Trousers". "Bell Bottom Trousers" was hot on the hit parade, and World War II was raging.  That was the reason for Grandma selecting that particular song. This song was very popular and was sung by various artists placed in the top nine positions for that year.  It was sung or played by Kay Kyser, Guy Lombardo, Jerry Colonna, Tony Pastor and Louis Prima.  Lombardo and Pastor were each to take it to the number two song in the nation. I was the darling to the radio and live performances.

Regretfully, I do not have a recording of me singing my first song on KARK and have precious few of any of my radio broadcasts.  Maintaining recordings back then was not nearly as prelavent as they are today.  However, I DO have a recording of me singing "Shame on You" in 1947. "Shame on you" was written and first recorded by Spade Cooley on January 15, 1945.  He wrote "Shame on You" to rebuke his straying girlfriend.  This Western swing song reached #1 and spent 31 weeks on the charts.  This recording was Cooley's first after taking over the band from Jimmy Wakely (a B Western cowboy star of black and white movies when I was a kid). Later in 1945 "Shame on You was recorded by The Lawrence Welk Orchestra with Red Foley (Dan played in his band).  Their version also went to #1. The reason I tell you all of this is to illustrate that I was singing the most current, popular music every time I stepped on on that stage.   It was cutting edge entertainment folks.  Here I am at the age of six singing "Shame on You". http://www.youtube.com/watch?v=4cSszhsBADc

We were bigger at that time than Elvis.  How do you gage this? Example:  Elvis came to Pine Bluff and performed at the Watson Chapel High School Auditorium in 1955. Elvis charged $.50 for that performance.  In stark contrast, I  was selling a single post card sized  picture of me (above)  for $.35.  These postcards were sold  at every live performance and by mail as a result of promoting them on our radio shows.  I can remember coming in from show dates with every pocket, and then some bulging with money. 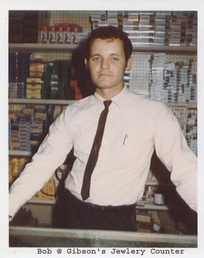 Some not so interesting dynamics began to occur between my Dad and me.  I was really getting hooked on rock-a-billy music.  Entertainers like Jerry Lee Lewis, Carl Perkins, and yes, Elvis Presley was beginning to catch my ear.  My Dad had no intention of playing "that kind of music".  The stage for a confrontation was set.  I eventually quit performing with my Father altogether.  That was a sad day for him.  Needless to say, that did not enhance my Dad's feelings for Elvis.  If you would like to hear me singing "Dear Hearts and Gentle People" please go to this website http://www.youtube.com/watch?v=b8gchtDD9es&lch=email&feature=em-comment_received&lc=aaCOLhNIMInBx48yo9sZY0Eg4iwEFL2VXJze0HLkW64 And, if you would like to hear MY version of the song Dad sang above, "Old Shep", listen to it here  http://www.youtube.com/watch?v=q6QYPL9cgzQ 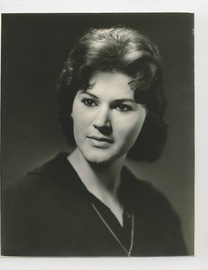 Partly because of Dad's unsatisfactory experience with Elvis, he was always helpful to other acts coming into their own. The Browns were one such group. Shelby Cooper and my Dad would back the Browns as they promoted their music. Dad said he just about wore out a fiddle bow playing "Looking Back to See" for them. J.E. routinely came by to see Dad to get his instruments tuned and to try out new music on him. The Browns would capture their first gold record in 1959 with song "The Three Bells". I dated one of the Brown girls, Norma (on the left). Norma performed on American Bandstand in the place of J.E. when he went into the service. I remember Norma using her "celebrity status" to con military officials when I was in Basic Training in 1959. Somehow she conned the drill instructors to bring me to the phone. Trust me when I tell you, getting someone out of basic training, even for a moment, was a rare, to non-existent event. That was a sweet thing for Norma to do, and quite a welcome surprise. Norma, my family, and I went back a long way. As an example, she used to cuddle up with my Mother every Sunday morning at church when she was younger. I regret to say that Norma died at too young an age! 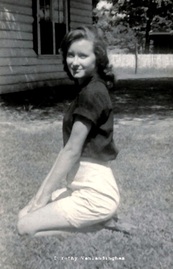 My first real love was Dorothy Vanlandingham. And this photo is how I remember her. Dorothy was best friends with Becky. Becky married J.E. Brown. Dorothy and Becky performed with headliner entertainment as dancers in the 50s and early 60s. In fact, they danced at Gus Stevens Seafood Restaurant & Buccaneer Lounge in Biloxi, MS, where Jayne Mansfield made her last performance prior to being killed in a car accident.  Both Dorothy and Becky still teach dancing and own their own dance studios.

Early in his career J.E. was a personal friend of Elvis. The Brown family had a supper club called The Trio just blocks from our home. Elvis routinely stopped by to see J.E. (and maybe Bonnie?) on the way home to Memphis. Elvis became friends with The Browns and J.E. helped him get on the Louisiana Hayride. Elvis was a little different even then. Very restless. Dorothy and Becky maintain a close relationship to this day. 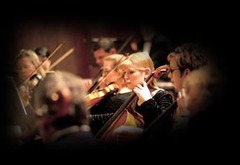 Dad continued to play music right up until he died from cancer.  His voice never left him.  I have music recorded that he sang three months before he passed away.  Dad's legacy was his music, and those he touched with his music.  Scores of musicians are now able to play classical music in symphonic orchestras because Dad had taught them so well. 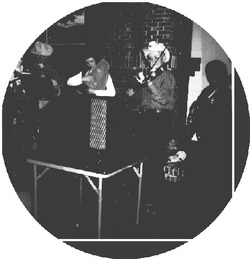 The photo on the left was taken not too long before dad died.  He was at a Fiddlers Association Meeting in White Hall, Arkansas.
My Dad died February 9, 1986.  He left behind a wife, five children and hundreds of friends.  Those he left behind will always remember "The Day The Music Died".
Powered by